I’ve been slowly settling in to life in Albuquerque.  Some of the things I worried about have turned out to not really be problems.  I wasn’t sure I’d like living so close to so many people, but my new place is in a quiet neighborhood so I don’t feel like there are too many people around most of the time.  There have been a few times when I’ve been trying to drive somewhere and have hit rush hour traffic.  It’s annoying to deal with.  The other day I was trying to make it to a yoga class and just couldn’t get there because traffic was practically not moving.  But I’m also very thankful that I don’t have to commute in traffic on a daily basis.  I have no idea how some people deal with that twice a day every day.

I’ve really been making an effort to get involved in a few activities.  I found a gym I really like that is very close to my house.  I’ve already made it to a few group classes there and think I’ll really enjoy going to more.  They have a water aerobics class that I’ve tried once and intend to go back to.  I am the youngest person there by a few decades at least but I think it will be a good class to go to as my pregnancy progresses.  I very rarely ever go swimming and it actually felt pretty good to be in the water.  Plus I think it will be nice as the summer heats up.

I also found a Meetup group for WordPress.  (WordPress is the platform that’s used for a lot of blogs and websites including this one.)  I’ve only made it to one gathering so far, but it was nice to get together with others.

There is a local library branch right down the street from my house, so I also went to go check it out one day.  I definitely want to start going to the library more.  I read a lot and end up buying too many books.  I generally only read them once and then I struggle to part with them.  (Moving has made it obvious I have too much stuff as I’m still working on moving some of it.)  Socorro actually had a library, but for whatever reason I never got in the habit of going.  I want to make it a habit to check out books rather than buying them.  I also learned how to use my library card to access their online books which makes it possible to ‘check-out’ books to read on my Kindle App on my phone or listen to as audio books.

I have to admit that getting out and going to these new places with all of these people I don’t know is something I have to push myself to do.  I would feel more comfortable curled up on the couch with a good book or walking in the woods by myself.  But the only way to develop connections in a new place is to get out and do new things and go new places.  I know that by forcing myself out to start doing these things eventually it will become more comfortable.

This week has included a trip to Ruidoso for a couple of days.  Ruidoso is one of my favorite New Mexico get-aways.  It’s a mountainy town with lots of trees.  It’s a gorgeous area and I’m always happy to visit.  The trip included a night of camping in the National Forrest.  The campsite was a very cool area by an old mine.  It was also obviously a place kids go to party with a few scattered beer bottles and an old orange chair by a giant fire pit.  Despite that, it was a gorgeous place. 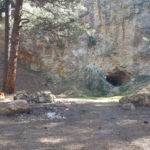 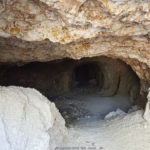 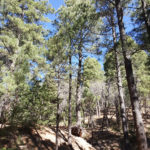 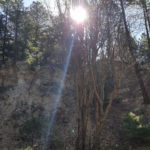 I’ve been reading Gretchen Rubin’s book Better Than Before: Mastering the Habits of our Everyday Lives.   I wrote more about the book in a recent post on it so I won’t get into that too much but wanted to reflect further on how it’s made me think about my own habits recently

There are various habits that I’ve worked to develop over the last couple of years.  Looking back at it, I’ve had long stretches of success with many of them but also ended up stopping a lot of them for some reason or another.  One thing that really helped me was a habit tracking app on my phone, but for the last few months I’ve gotten out of the habit of using it and in turn that made some of my good habits crash too.

One of the problems with the app is that I get too excited about making new habits and just end up with too many to really change at once.  I’ll end up sticking to most of them for a while and then lose momentum with a few bad days.

So, this week bringing back the habit app with just one habit in the list: yoga and meditation.  OK, that’s two things but they go together so well that I’m OK with that and I’m fine doing them together.  I do know that I get a lot of benefits from yoga and meditation.  While it hasn’t been a daily habit for me recently, it has been at some points over the last few years.  I’ve certainly stuck to it on a relatively regular basis over the last 4 years or so- going to yoga classes 1-3 times a week most weeks and practicing at home.  I just want to get back to a daily practice if only for a few minutes each day.  I also want to make sure that now that I’ve moved I find yoga classes I like in Albuquerque and keep going to classes on a regular basis.  That’s one habit that I don’t want to get derailed with the change in location.

One thing Better Than Before mentioned was the idea of how a clean slate can help us to make or break habits.  Big life changes like moving, changing jobs, getting married or having a baby can create an opportunity for an easy change in habits.  So as I settle in to living in Albuquerque, I want to be very aware of the new habits I’m forming and also of the ones I don’t want to accidentally let go of.  I’m also thinking about what sort of habits I want to have once my baby is born.