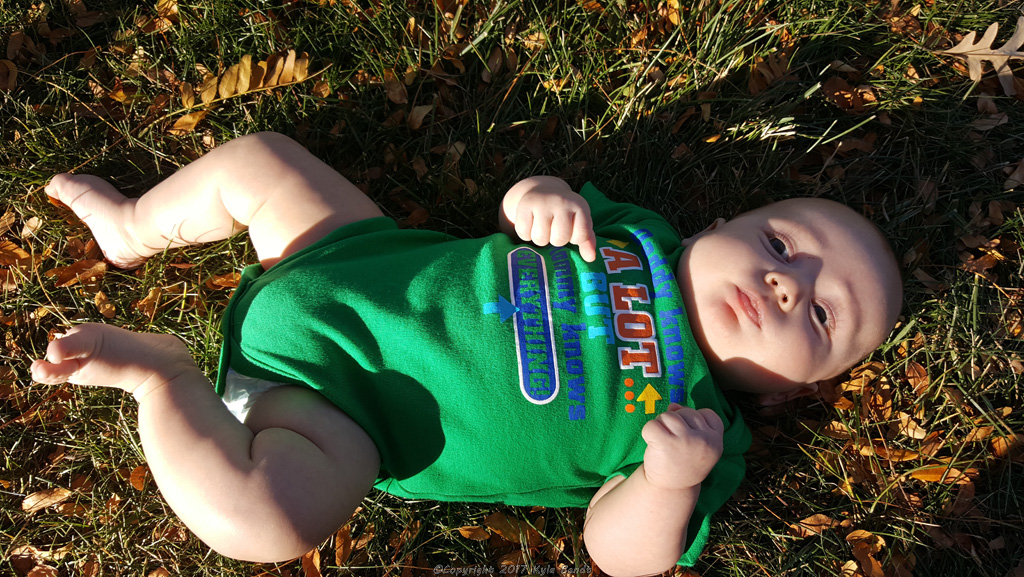 Daddy knows A LOT but Mommy knows EVERYTHING!

To be precise, he’s three months, one week and one day old.  Every week is different with him.  He is changing and developing at such a rapid pace.  I’ve decided that I really like the stage he’s at right now.  He is awake and aware more.  He smiles.  He still likes to snuggle a lot.  He’s started sleeping for longer stretches.  If I leave him in a spot, he’s still in the same spot when I come back.

He’s a talker.  He will lie on his playmat and make happy noises for hours.  OK, hours is an exaggeration, but it feels like it sometimes.  I feel so blessed to have such a good-natured baby.

When I found out I was pregnant, I swore that this wouldn’t become a mommy blog.  Now that I have baby B, he seems to be the center of my universe.  All of the recent pictures are of him.  Most of this post is going to be about him.  I know that it won’t always be like that though.  I am slowly starting to work some of my other passions and responsibilities back into my life. 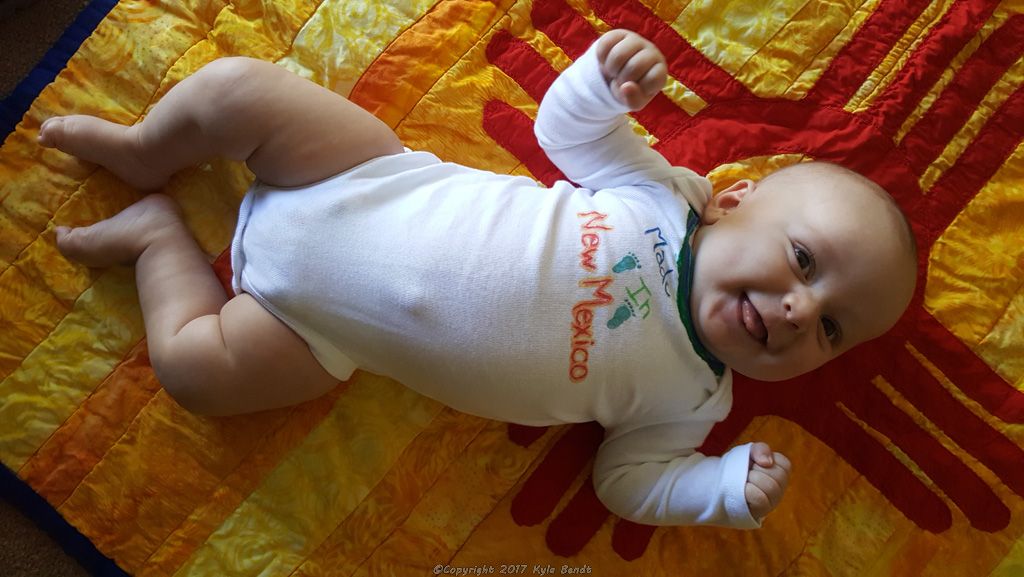 Made in New Mexico!

One thing that I’m proud of myself for is all of the things I have gone and done with baby.  S an I have taken him on two road trips, one of which involved camping.  I’ve made a huge effort to get out and do things.  Within a day or two of getting home from the hospital, I had him in the stroller for walks.  I’ve made it a habit to get out on a walk with him at least a few times a week.

We’ve been to mom and baby yoga a few times, to some mommy meetups, to the library, to Costco, to the gym, out to eat, on some hikes and probably some other places that aren’t coming to mind at the moment.  At first, it took more effort.  I’m glad I put that effort in though because it’s becoming easier and easier.

It has taken a little trial and error to figure out how to incorporate baby into my activities.  Mom and baby yoga ended up being a lot more baby than yoga.  I’ve found that’s not really for me.  I prefer dropping him off at the childcare at the gym for an hour and going to an adults-only yoga class. 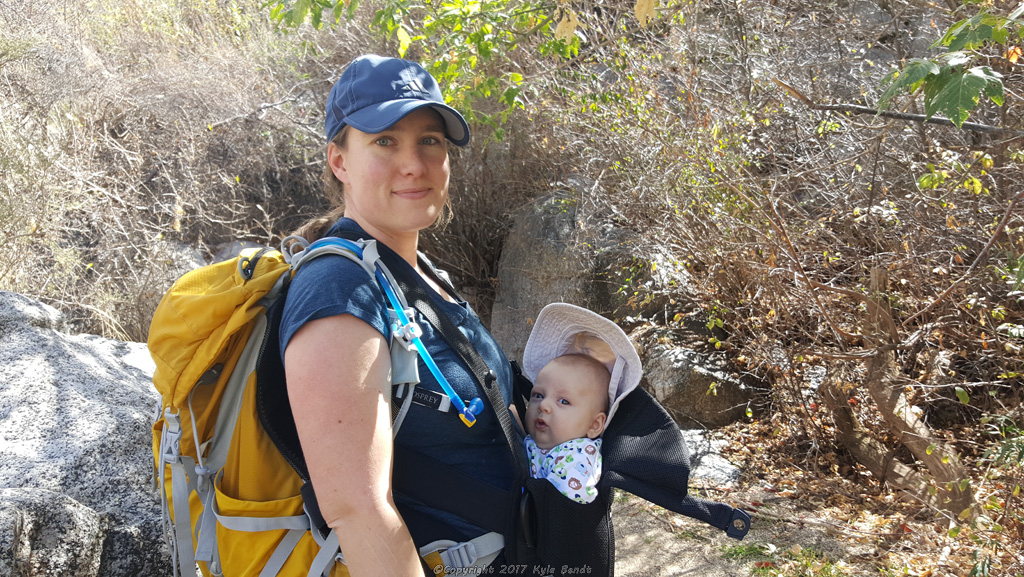 Me and baby B out hiking in the Sandia mountains!

Speaking of childcare, it’s been a revolutionary thing in my life lately.  For the first couple of months, S and I didn’t leave baby B with anybody else.  I didn’t want to take him to the childcare at the gym because I didn’t want him to get sick.  It also took a while to get breastfeeding down well enough that I felt comfortable trying to leave him with a bottle.  I love my time with baby B, but the 24-hour nature of it was just exhausting.

In the last few weeks, he’s spent a couple of days with his aunt.  This month, I added him onto my gym membership so I can drop him off when I go workout.  For a small hourly fee, I can also drop him off there and leave the premises.  Even a few hours to myself make me feel so much better.  I get a chance to catch up on work calls, take a quick nap, or do whatever else.  S gets a break too.

I’d like to say that it breaks my heart to leave him.  Maybe this will sound bad, but it really doesn’t.  I’m just so excited to get time to take care of other stuff.  It helps that I really trust the people that I leave him with; I wouldn’t do it otherwise.  I figure it’s good for him to get a change of scenery for a few hours and to start meeting more new people and other kids.  I know it’s good for him to have a mom that gets a break sometimes.

I’m really looking forward to continuing to find a bit more balance between baby and the rest of my life.  I still want B to be my first priority.  I want to make the most of this time with him as a baby because I know it’s precious.  I also want to keep my sanity.

Sleep with baby B has recently gotten much easier.  Now that he’s a big boy of three months, I no longer baby him quite so much.  The routine used to be walking him around, reading stories, nursing, snuggling, walking him around again, and nursing again until he finally fell asleep only to have him wake up when as soon as I lay him down and then handing him off to S who would repeat the whole thing minus the nursing.

Now, I put him in his cute footy-PJ’s, S and I read to him, he gets a bedtime snack, and then I lay him down and leave him.  Sometimes he’ll fuss for a few minutes, but it never takes long until he’s out.  I have to wonder if all our previous efforts to get him to sleep were really just keeping him awake.  I know that he may also have just matured enough to sleep better at this point.

The other super nice thing is that he now sleeps for 5-7 hours for the first stretch most nights instead of waking up every 1-3 hours like a newborn.  It feels heavenly.

I have been making an effort to get back to writing more.  With baby B going to bed by himself, I now have an hour or two in the evenings free.  This week, I’ve been taking advantage of that to spend some time writing.  It feels so nice. Hopefully I’ll have some more writing to share here over the next few weeks.

I’ve been reading Stephen King’s book ‘On Writing’.  I have seen it quoted in other places a few times, so when I came across it at the library I thought I’d give it a chance.  It has been a good read so far and has given me a little extra motivation to write more.  It’s been interesting to learn more about his writing process.

My lettuce plants are still clinging on to dear life.  They are not, however, growing very much.  Perhaps I’ll try to get another picture of them for my next post… that is, if they’re still alive then.