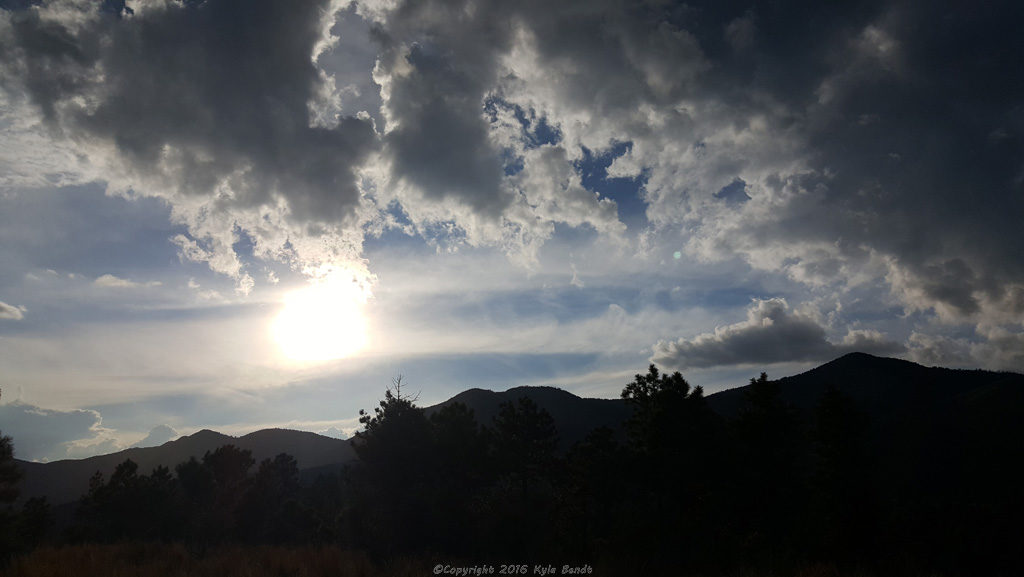 The Manzano mountains lie about an hour’s drive from my house and yet I have visited them only twice very briefly in the years I’ve lived there.  They are kind of the southern extension of the Sandia Mountains that dominate the eastern skyline of Albuquerque.

My first visit to the Manzano mountains came because I wanted to visit Manzano Mountain State Park.  I was driving towards there on the way home from a trip to Oklahoma.  It was already dark by the time I got to the State Park and beyond that, it was closed for the season, so I couldn’t even go see it.  Turns out that it is a small State Park that is little more than an RV park.  OK, it probably has less to offer than many RV parks.  Rather than turn back and take the paved road, I headed up a dirt Forrest Service road into the mountains.  I’d never been there before, it was late and I was exhausted and yet wired with the excitement that comes with exploring.  I was driving my beat up ’91 Honda Accord with too many miles on it and very little clearance.  Admittedly, I was probably taking the road faster than I should have been.  It was in good shape, but on a dirt road, you never know what is around the bend.  I think that added to the excitement in it’s own way.

Still, it all worked out OK and by some miracle the road I was on connected back up with the paved road towards home some 20 or 30 miles later.  It was dark on my drive, so I couldn’t really see much of what was there.  When I stopped alongside the road and looked up at the stars and could hear the wind in the trees and smell the fresh air, I knew I wanted to come back.  I did make it back one snowy winter day for a drive through the mountains, but it wasn’t until recently that I made it back to really explore.  Driving through a place isn’t the same as really being there: walking on the ground, sitting and listening to the silence, sleeping and eating and watching the sun move across the sky.

This time I was determined to make up for my short trips just passing through by staying a couple of nights and going for a hike in the area.  It was gorgeous there upon arrival, with tall, peaky mountains rising out of a gently rolling sea of trees.

The next morning Hoppy and I along with another traveling companion headed out for a hike up Manzano peak.  It was overcast and cool; a welcome relief from the recent heat of the summer.  The first part of the trail was in pretty good shape and the hiking was easy.  There was a wild raspberry patch growing along part of the trail.   It was pretty delightful to pick the ripe little berries and eat them.  Although I did learn that raspberry plants are a bit prickly.

Then we encountered a large area that had burned several years ago.  The ground was full of fallen trees and many of them went across the trail making for some rough going.  Eventually, we decided to ditch the trail and just head straight up the side of the mountain.  It was very steep going and I had second guesses about this choice a few times but eventually we caught back up with the trail to finish our climb up to the peak.

There was a ladybug swarm close to the top of the peak.  There were literally thousands of ladybugs covering logs and bushes.  I used to really like ladybugs and think that they were cute but seeing so many was actually rather creepy.  Although I really know very little about ladybugs, I am pretty sure by the positioning of some of the them that the males are smaller than the females.  It does seem strange that there are male ladybugs.

After I stopped to take a bunch of pictures of the ladybugs, we made it to the top to snap a few pictures.  Being on the top of a mountain is a great feeling.  It’s simply amazing to be able to look around and see so far out across the landscape.  There were very dark, menacing clouds in the distance but we mostly weren’t paying that much attention to them.

Mountain peaks are not the best place to be in lightning storms, and perhaps it would have been smarter for us not to make the climb on such an overcast day.  It started raining and then hailing as we sat on the peak and we soon packed up to head back down the trail.  The hail grew heavier and we hid under a small stand of trees shivering and hoping it would lighten up.  Eventually the hail stopped and we continued on.  The rain continued for hours. I was soon completely soaked.  My feet were squishing in my boots with each step.  I had my rain jacket, but it’s not really good for much more than light rain.  Once it finally quit raining and I took off my rain jacket, my hoodie underneath of it was so soaked that I was wringing water out of my sleeves.

This time we followed the trail for the five miles back down, trying to make good time and get out of the rain, but we were slowed by the rain, thick undergrowth, muddy ground and fallen trees.  Eventually, the rain above us let up and we could look out and see several different lightening storms in areas around us.

By the time we arrived back at the car, it was almost dark.  We thought about just driving back to Socorro, but were too tired.

“OK, but I’m not sitting out in the rain and cooking anything.”

“I’m not cooking either.”

So we ate cold tortillas and cheese for the third time that day.  It’s funny how much one appreciates simple things under certain circumstances.

We woke up the next morning and took another much shorter hike before heading back to Socorro. 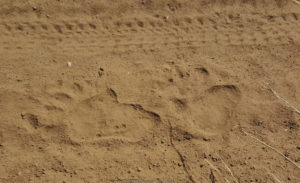 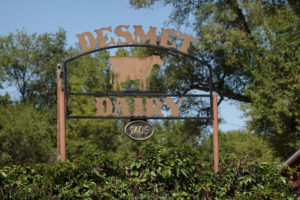 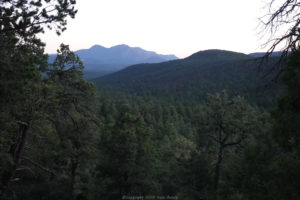 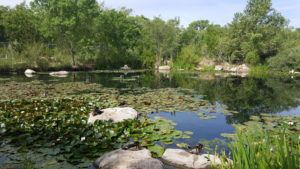 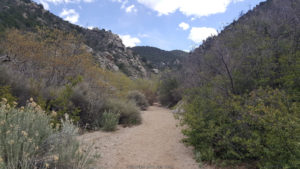 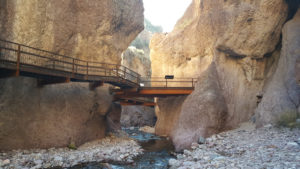